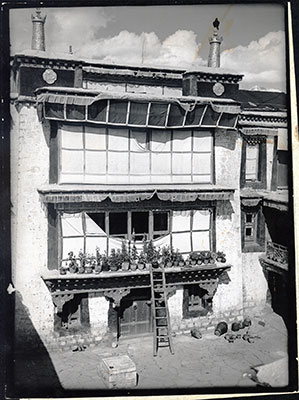 The Lhasa house, formerly the residence of the Dalai Lama's favourite Kumpa La, where the Chikyak Khenpo hosted a lunch for the Mission in October 1936. Cylindrical gilt banners on roof, Buddhist plaques beneath them. Mounting block in foreground. The ladder seems to be in place to water the flower pots. On the tops of private houses one sees gyaltsen, or gilt victory banners, it means the house contains a complete set of the Buddha's teachings. The family would only live in the upper levels of the house and servants quarters would be around the courtyard

Notes on print/mount - The back of the print is covered in crop and reproduction marks. The caption "An official's Lhasa House" has been written on the back in pencil, as has the caption C.5.2. A thin piece of paper has been stuck across the top back edge of the print and folded over the front. This would have been used to transfer crop and reproduction instructions. The caption has been repeated on the front, written in capital letters [MS 27/03/2006]

Other Information - Cultural Background: The house features cylindrical gilt banners on the roof, Buddhist plaques beneath them and large windows. Mounting block is visible in the foreground. [CH 2003]