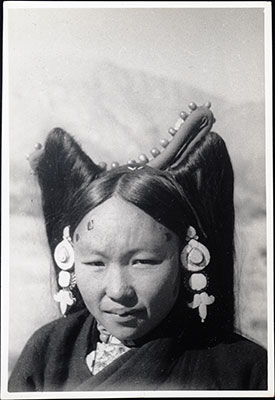 A young Tibetan woman wearing a Lhasa style head dress decorated with pearls and corals on the top and elaborate turquoise jewellery at the side. She is also wearing an amulet box, or gau, which has been tucked into the top of her outer garment or chuba. This woman was probably what the mission members referred to as 'Chang girls', a somewhat derogatory term for the young women, often of high status, whose role at parties and lunches was partly to hand out alcohol. This young woman seems to have been referred to as 'The Cat'. She has place two beauty spots on her forehead

Other Information - Related Images: Images prefixed with 'BJ' comprise a group of negatives containing images of the Lhasa band, chang girls, Tibetan officials including Tsarong and Ringang, Finch, Norbhu, Everest Permit and Khampa people. They all seem to have been taken in the early part of January 1937. This image seems to have been taken on the occasion of the New Year party hosted by the Mission for Tibetan officials [MS 27/03/2006]