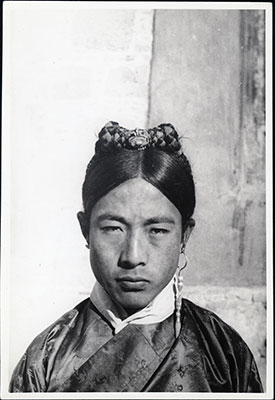 Official, possibly Changlochen, with hair wound on top of the head and fixed with a small jewel box and wearing official's earing. Head and shoulders. The hairstyle is called pachok.

Other Information - Cultural Background: The son's of aristocrats had to adopt this hair style from the age of sixteen. If their hair was not in this fashion, they would not be allowed to participate in government meetings and so on. If someone was dismissed from office, they would cut off his hair. Sometimes the sons of aristocrats who went for military training in the Indian Army's Military Academies would face a problem as their hair would have been cut and they would not be able to participate in government meetings. Some would rather remain away from Tibet until their hair had grown long again than face this humiliation [TS 17/2/2005]

Other Information - Related Images: Images prefixed with 'BH.' comprise a group of negatives containing images of Officials, a Khampa man, Sir Basil Gould and various personnel on the Mission in 1936-7. They all seem to have been taken on, just prior to or immediately after December 10th 1936. This image comes towards the end of the sequence, suggesting that it may be the young official Changlo-chhen, who it is detailed in the Mission Diary visited Gould on December 11th [MS 16/03/2006]