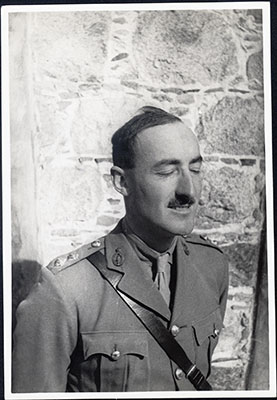 Portrait of Nepean, a member of the British Mission, in army uniform. Head and shoulders with eyes closed.

Other Information - Related Images: Images prefixed with 'BH.' comprise a group of negatives containing images of Officials, a Khampa man, Sir Basil Gould and various personnel on the Mission in 1936-7. They all seem to have been taken on or just prior to December 10th 1936. On the occasion of this photograph it seems that the Mission staff were all having their portraits taken in formal dress prior to an official visit to Kundeling Monastery to see the 'Disease Chasing Ceremony'. [MS 16/03/2006]