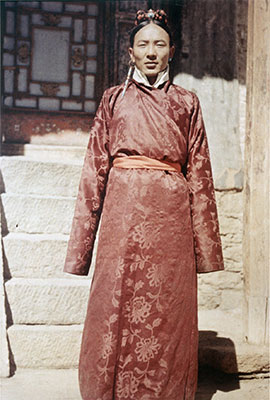 The Prime Minister, Yapshi Lungdun. Full length portrait, possibly taken outside his house in Lhasa. He is wearing a brocade chuba or outer garment

Technical Information - This print has been produced in reverse and should be flipped to see the image the correct way round. This is probably because it has been printed directly from a flipped colour transparency. Many transparencies became flipped in this way when they were copied for reproduction purposes [MS 07/04/2006]

Other Information - Setting: The Prime Minister of Tibet, Yabshi Langdün, at home. Spencer Chapman describes Gould’s first meeting with him: “He was not very easy to get on with, and remained very much the official, seated on a ceremonial divan at a higher level than the one he had prepared for Gould”. The Mission members attributed his stiffness to “youth and inexperience, rather than to any feeling of unfriendliness”. (1938:101-2) Langdün was the nephew of the 13th Dalai Lama, which might explain why he acquired such an important job at such a young age. He was greatly concerned with status and would demand a film show at his house if somebody else had already had one. He commissioned Spencer Chapman to produce this family portrait. [CH 2003]