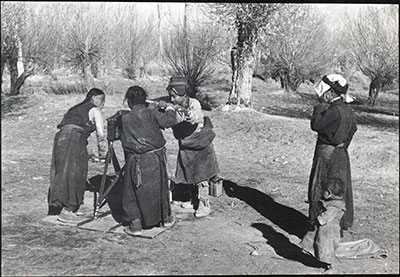 Group of three Tibetans turning two handles on what is either the wireless charging motor or accumulator. Motors would have to be wound by hand in order that they could work because of the height of Lhasa above sea-level. Another looking on with small child. In his notes Spencer Chapman writes 'charging the motor'.

Manual Catalogues - Caption in Chapman's hand-written list of negatives made whilst on the Mission to Lhasa, 1936-7 [See PRM Manuscripts Collection]: 'Changing [charging?]motor' [MS 25/03/2006]

Other Information - Related Images: Images prefixed with 'BC' comprise a group of negatives containing images of horses racing, mission syce on horseback, Chaksam ferry to the east of Lhasa, starting a motor, birds. They seem to have been taken in December 1936, mainly on the trip to Nakartse between December 14th - 23rd [MS 25/03/2006]

Other Information - Setting: "It will be remembered that at Gyantse we discovered that the wireless charging motor would not work owing to the great height above sea-level, so Dagg returned to Calcutta in order to procure a hand-power charging set while Nepean remained at Gyantse to set out wireless gear. It was not until 6th September that Nepean reached Lhasa. Dagg arrived three weeks later with a hand-charging motor that he had constructed in Calcutta. This was to be operated by coolies, who turned its handles and thereby charged the accumulators. The advantage of this was that if we went beyond Lhasa to met the Tashi Lama we could provide out own power for wireless transmission. In Lhasa itself the accumulators were usually sent along to Ringang to be recharged. There was not enough wire in Lhasa for the town electricity supply and we had to rely on accumulators for wireless transmission and for working our cinema projectors" ['Lhasa: The Holy City', F. Spencer Chapman, London: Chatto & Windus, 1938, p.244] [MS 25/03/2006]

Other Information - Cultural Background: The labourer in the centre of the image is wearing a rope hanging down the back, which many labourers have, and the woman on the right has her head covered with a piece of cloth to protect her from the sun [TS 14/2/2005]