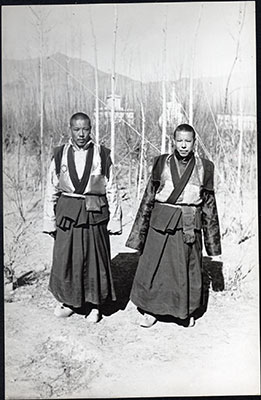 Tsetrung Choden Tendar, the monk telegraph master of Lhasa on the right and his brother, Mipon Seksing, on the left. Chortens can be seen in the background.

Manual Catalogues - Caption in Chapman's hand-written list of negatives made whilst on the Mission to Lhasa, 1936-7 [See PRM Manuscripts Collection]: 'Telegraphist and brother' [MS 25/03/2006]

Other Information - Relates Images: Images prefixed with '3' comprise a group of negatives including Mondo and telegraph officers, and views of Potala from Chakpori and other vantage points. They all seem to have been taken between January 25th - 27th 1936, with this image probably having been taken on January 25th [MS 25/03/2006]

Other Information - Setting: Entry in Mission Diary for January 25th 1936: "Today we had a large lunch party of officials who had not been invited before. There was Ringang's elder brother, a genial man who was once Depon in Kham. Kusho Choden Tendar the busy monk Telegraph-master was another guest; after lunch he went round to Dagg's tent and to his unbounded delight had a wireless conversation with Nainital. His brother - another monk official, Mipon Seksing, an old city Magistrate and Mondo, one of the boys who were at Rugby, completed the party" ['Lhasa Mission, 1936: Diary of Events', Part XIII p.2, written by Chapman] [MS 25/03/2006]