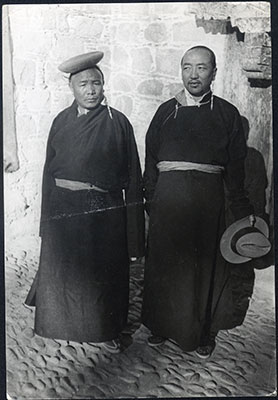 Notes on print/mount - 'X/27' has been written on the back of the print. This has enabled identification of the image as 'CX.27' in Chapman's handlist of images made whilst in Lhasa [MS 25/03/2006]

Manual Catalogues - Caption in Chapman's hand-written list of negatives made whilst on the Mission to Lhasa, 1936-7 [See PRM Manuscripts Collection]: 'Another 2 5th Rankers' [MS 25/03/2006]

Other Information - Cultural Background: It is possible to identify these figures as lesser officials because high-ranking officials and aristocrats always have to have long hair. It is not possible to attend high-status government meetings without having the top-knot which signifies rank. [TS 14/2/2005]

Other Information - Related Images: Images prefixed with 'CX' comprise a group of negatives containing images of Phendong and his house, grinding grain, officials (5th rank), Rupon, doctors, artists at work, official’s at Regent’s departure. They all seem to have been taken between October 2nd - 6th 1936, with this image being taken on October 3rd [MS 25/03/2006]

Other Information - Setting: Mission Diary for October 3rd: "Today we gave the last of our big lunch parties. The guests were officials below the fourth rank. They were as easy to entertain as all our earlier guests and it was an enjoyable afternoon but we were all relieved to see the end of a week of parties" ['Lhasa Mission, 1936: Diary of Events', Part VII p. 2, written by Hugh Richardson]. See Bodleian Library Hugh Richardson Archive MS. Or. Richardson 3 folio 42 for a fuller description of this event.