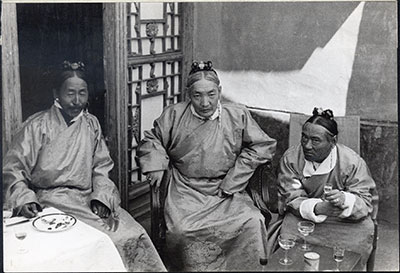 The Mission entertaining visitors. From left to right: Rai Bahadur Norbhu Dhondup, Trimon Shappe (now ex-Shappe) and Tsarong. On this occasion the Mission was hosting a lunch for the highest ranking Tibetan officials, and Gould also held discussions with the Cabinet

Notes on print/mount - The reference 'C-U-20' has been written on the back of the print in pencil. The print back is covered with crop and reproduction instructions, apparently layered on the print at different times. The caption "We entertain visitors - Norbhu, Trimon, Tsarong" has been written along the bottom edge of the print back. A piece of thin paper has been stuck onto the back and folded over the front, which provided a means for transferring cropping information from back to front. The caption has been repeated, in capital letters, on the front [MS 24/03/2006]

Other Information - Related Images: Images prefixed with 'CU' comprise a group of negatives containing images of gentians, lammergeyers, and vultures, Hugh Richardson and cairns, Gyamberi [‘Holy Hill’], Norbhu, Trimon, Tsarong, Ringang, Gould, Tendong, 'chang girls'. They seem to have been taken on September 27th - 28th 1936, with this image having been taken on September 28th [MS 24/03/2006]

Other Information - Setting: From left to right: Rai Bahadur Norbhu Dhondhup, Trimon Shappe and Dasang Damdul Tsarong having a drink at the Dekyi Lingka. Norbhu was chief diplomatic assistant to the British Mission in Lhasa and Tsarong, the aristocratic friend of the Gould Mission and host of fine parties. Spencer Chapman describes Trimon thus: “Trimon, a ex-shappe, came to call. He is grey-haired and looks old and worried. He has just married a new and attractive wife, in whose Lhasa house he now lives; but soon he returns to Gyantse to occupy some estates he has gained possession of after a long and expensive lawsuit. They say that when he wanted to retire from his duties as a Cabinet minister his resignation was refused by the Dalai Lama, so he took off all his clothes and, feigning madness, ran naked through the streets of Lhasa. He is anything but insane now, though he seems saturnine and disillusioned.” (1938:87) Tsarong and Trimon were both former shappe (cabinet ministers in the Tibetan Government) but still seemed to have a great deal of influence in political affairs. [CH 2003]

Other Information - Description: Mission Diary entry for September 28th 1936 - "We gave a lunch party to the officials of Cabinet rank. They were the three Shapes, Trimon shape (retired), Tsarong Dzasa, the Chikyap Khempo (head of all the monk officials) and the Yapshi Kung (a relation of a former Dalai Lama). Ringang also came as interpreter. // Before lunch Mr Gould met the Kashag for a brief but profitable business talk. // Our Tibetan guests are easy to entertain and appear to enjoy being entertained. There is never any hurry to break up the party. This one lasted until 5 p.m." ['Lhasa Mission, 1936: Diary of Events', Part VII p.1, written by Richardson] [MS 24/03/2006]