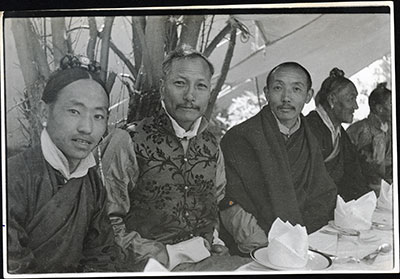 Rampa on the left, and the monk official, Dapma Kusho Tsedon, who advised the Mission at lunch in a tent in the Dekyi Lingka. Between them is one of the senior clerks to the mission, wearing Sikkimese dress. Ramba's hair ornament would usually be made of gold and precious stones. Western-style cutlery has been laid on the table for the guests

Manual Catalogues - Caption in Chapman's hand-written list of negatives made whilst on the Mission to Lhasa, 1936-7 [See PRM Manuscripts Collection]: 'Lay guide Gyaltsen and monk guide at lunch' [MS 23/03/2006]

Biographical Information - Chapman states in his book Lhasa the Holy City [London: Chatto & Windus, 1938; reprint, London: Readers Union Ltd., 1940, p.85 and p.89] that Ramba was jointly in charge of the hamlet of Sho at the foot of the Potala, a responsibility that he shared with Mondo, who had previously attended Rugby school in the UK. Chapman attempted to describe the manner in which official classifications were structured. He wrote: "One hundred and seventy-five lay officials are usually appointed, and a similar number of ecclesiastics. Very often certain positions are duplicated, a monk and a lay official being jointly in charge. For instance, the small hamlet at the foot of the Potala is in charge of Mondo (the monk Rugbeian) and Ramba (the acting lay guide to the Mission). The dzongpons similarly work in pairs, so also do the Commanders-in-chief of the army" [1940, p.89]

Other Information - Related Images: Images prefixed with 'CV' comprise a group of negatives containing images of chang girls, dancing girls and band, ‘King’ of Lhadu’s monk, medical work at mission hospital, Gould and Lonchen Shatra, wall painting in Duke’s [Kung] house, Potala from Chakpori, telephoto views of Potala and Kundeling, Gyaltsen, staff of mission. They seem all to have been taken between September 28th and October 1st 1936 [MS 23/03/2006]

Other Information - Setting: This photograph seems to have been taken on October 1st 1936 when the Mission hosted a lunch party for 4th rank officials. Richardson wrote in the Mission Diary of this occasion: "We gave a lunch party for 18 guests who were mainly fourth rank officials. Some of the more important officials could not come as they were too busy in arranging for the Regent's departure. The party, though not quite so convivial as that which we gave to the higher officials, was very successful and broke up at about 5 p.m. // The Public Address outfit is a great help in supplementing the Tibetan orchestra" [MS 23/03/2006]