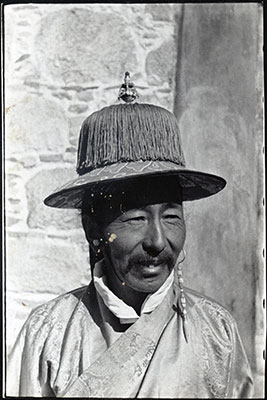 Rai Bahadur Norbhu OBE, a Tibetan aristocrat who worked as interpreter to the British Mission, in a head and shoulders portrait, wearing the hat worn by officials in summer. It has a brocade brim and a high crown of red silk tassels with a coral ornament on top

Notes on print/mount - There are a large number of crop and reproduction markings on the back of this print. 'B-H-9' has been written on the back in pencil, as has the caption 'Rai Bahadur Norbhu OBE (hat worn by L. officials summer)' [MS 23/03/2006]