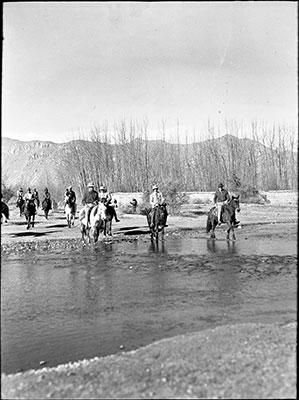 The British Mission riding across a small river as part of a 'paper chase'. This was one of the leisure activities that the Mission members engaged in to keep themselves occupied and their horses fit. It involved a mission member laying a trail of paper, which mission staff would then follow in a race. A group of mission staff follow behind with, left to right, Morgan, Nepean, Richardson, Gould, leading the chase. A walled enclosure and willow trees in background.

In Negative - The number '19' has been scratched into the bottom right hand corner of the image. This has assisted identification of the negative as 'C.15.19' in Chapman's handlist of images [MS 23/03/2006]

Manual Catalogues - Caption in Chapman's hand-written list of negatives made whilst on the Mission to Lhasa, 1936-7 [See PRM Manuscripts Collection]: 'Paper chase starting off. Out of focus' [MS 23/03/2006]

Other Information - Setting: "Nepean was made huntsman of "Mr Gould's Hounds" when they used to meet occasionally for a paper-chase. This was grand fun, as the country is ideal for the sport. The servants would be occupied all the morning tearing up old newspapers, and at 2pm the "hares", usually one of us and a clerk, would set off armed with two haversacks full of paper. Ten minutes later the field would assemble - about twenty would attend the meet - and set off in pursuit. ... Sometimes false trails would be cunningly laid and there would be a check. Often the hunt would finish with a wild neck-and-neck gallop between one hare and the leading hound. ... // The Tibetans, by the way, could never make out what we had lost when they saw us searching for the trail and then suddenly setting off at a gallop with our eyes fixed on the grass. They also had a disconcerting habit of picking up any odd bits of paper they found - a habit shared by the restless Tibetan wind" ['Lhasa: The Holy City', F. Spencer Chapman, London: Chatto & Windus, 1938, p. 268] [MS 23/03/2006]