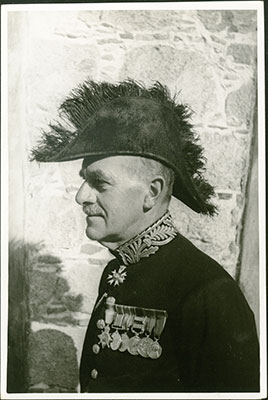 Sir Basil J. Gould in official uniform. A head and shoulders profile portrait. This photograph was probably taken on the occasion of an official visit to Kundeling Monastery to see the 'Disease Chasing Ceremony'

Other Information - Related Images: Images prefixed with 'BH.' comprise a group of negatives containing images of Officials, a Khampa man, Sir Basil Gould and various personnel on the Mission in 1936-7. They all seem to have been taken on, just prior to or immediately after December 10th 1936 [MS 16/03/2006]

Other Information - Setting: Mission Diary for December 10th 1936: "Photographs were taken of all the Mission staff. Perhaps the syces in their tall gold-ornamented hats, and loose fitting robes edged with leopard skins, are the most spectacular members of our party. // In the afternoon we visited Kundeling monastery, where our landlords live" ['Lhasa Mission, 1936: Diary of Events', Part X p. 3, written by Chapman] [MS 22/03/2006]