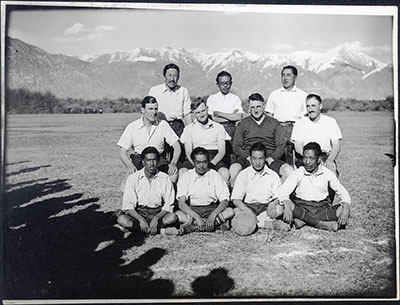 Other Information - Setting: "Today we were challenged to a game of 'Soccer' by Lhasa United, a team picked from Tibetan, Ladaki (Mohammedan) and Nepalese sides. // They turned out in garish Harlequin-coloured shirts. After a good, clean, hard game the Mission Marmots (as we call ourselves) won by scoring the only goal of the day. The goal was so small that the only hope of scoring was to go through oneself with the ball. Playing at 11,800 feet is not as much of an ordeal as one would imagine, and we appeared to be no more breathless than our opponents. // We now practice nearly every day and are thinking of picking up a number of seven-a-side teams to keep ourselves in training" ['Lhasa Mission, 1936: Diary of Events', part VIII p. 2, written by Chapman] [MS 22/03/2006]

Other Information - Historical Background: “The Mission Marmots” was the name given to the 1936 British Mission football team. The Mission established this team to play against various local groups (including “Lhasa United”) on a pitch behind the Norbhu Lingka. No goal was ever conceded by the British perhaps because they wore army field boots – prompting a request from the Ladakhis that the British should refrain from “wearing those fearful boots”. The football season came to an abrupt end when someone stole the goal posts to use for firewood and sandstorms became frequent. Team members Back row from left to right: Sonam, ?, Minghu. Middle row from left to right: Spencer Chapman, Dagg, Morgan, Nepean. Bottom row unidentified Tibetans. The lack of names for some of the Tibetan players in this photograph may be explained by the fact that only Norbhu (the Mission translator) was able to tell who was who amongst the Tibetan servants to the Mission. [CH 2003]