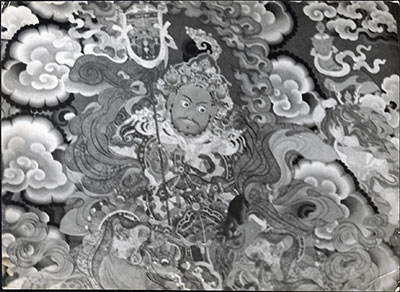 Fresco at the entrance to Sera monastery of one of the four guardians of Buddhism, Vaisravana (Guardian of the North) holding a banner of victory and a jewel-spitting mongoose.

Other Information - Description: " ... magnificent frescoes on the outer walls of the temples, and hanging 'tankas' within, more beautiful and richer in colour than any we have seen elsewhere. These depicted conventional subjects such as the Wheel of Life, a superb blazing god of wrath ten feet high surrounded by a thousand lesser deities, and a line of seated Buddhas, each with a different expression" ['Lhasa Mission, 1936: Diary of Events', Part VIII p. 2, written by Chapman] [MS 21/03/2006]