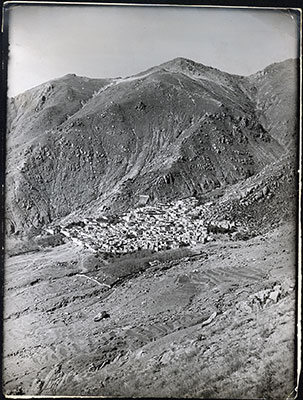 Notes on print/mount - The back of this print is covered with crop and reproduction instructions. The caption 'Drepung Monastery - the largest mon. in the world' has been written in pencil. The reference 'C/12/17' has been written in the centre back of the image. A piece of thin paper has been stuck to the back of the print and folded over the front in order that crop marks etc. can be transferred to the front of the image. On the front the caption 'Drepung Monastery, the largest Monastery in the World' has been repeated, albeit written in a different hand [MS 21/03/2006]