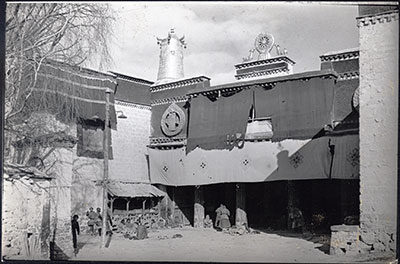 Entrance to the Jokhang. Gilt decoration on roof. Yak wool awnings as sun shades. On the left, beneath a willow tree, is the Smallpox Edict pillar. The two deer on the roof of the building represent the Buddha's First Sermon at Sarnath. Pilgrims can be seen prostrating themselves before the entrance of the temple. A street lamp has been installed in front of the entrance gateway

Other Information - Related Images: Images prefixed with '7' comprise a group of negatives containing images of the Potala, yaks and donkeys and the front of the Jokhang. They all seem to have been taken in January 1937 [MS 21/03/2006]

Other Information - Historical Background: The 7th century Jokhang temple is the spiritual centre of Tibet and an important pilgrimage site due to the presence of the Jo Sakyamuni (an image of the Buddha as a child). In this image we also see evidence of the modernisation of Lhasa in the form of street lamps. [CH 2003]

Other Information - Cultural Background: The Jokhang is the spiritual centre of Tibet and an important pilgrimage point. Dates from the 7th Century. [Marina de Alarcón ZF 1995.1]