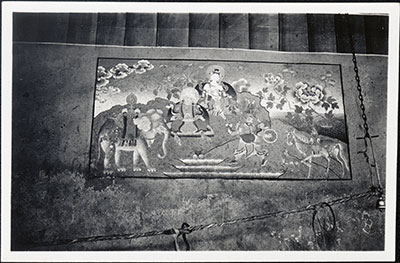 Fresco depicting Buddhist scene with lama and deity seated on a hillside. Attendant, jewel horse and elephant in the Norbu Lingka stables

Other Information - The Elephant is an auspicious symbol of sovereignty in Buddhist iconography (borrowed from Indian iconography). [Marina de Alarcón ZF 1995.1]