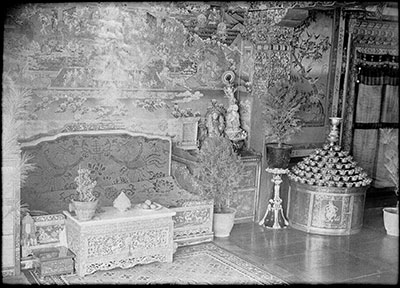 The Dalai Lama's chair in the Audience Room in the Norbhu Lingka. Cone of water bowls as offerings, refilled with clean water every day. The seat is where the Dalai Lama would sit when receiving visitors

In Negative - The reference 'C-20-8' has been scratched into the bottom right hand corner of the negative. This refers to the numbering system that Chapman adopted for images taken whilst on the British Mission to Lhasa in 1936 [MS 16/5/2005]

Manual Catalogues - Caption in Chapman's hand-written list of negatives made whilst on the Mission to Lhasa, 1936-7 [See PRM Manuscripts Collection]: 'D.L.’s throne and cone of waterpots' [MS 20/03/2006]

Other Information - Setting: Chapman wrote about his impressions of the Norbhu Lingka in his book Lhasa The Holy City, [London: Chatto & Windus, 1938; reprint London: Readers Union, 1940]: "The Norbhu Lingka comprises three separate palaces, houses for the Grand Chamberlain, Chief Secretary, and other officials attached to the Dalai Lama's staff, reception and throne rooms, an inner enclosure including an artificial lake with two summer pavilions, the royal stables, and the barracks where live the 500 troops of the Dalai Lama's private bodyguard. His Holiness was accustomed to move from one place to another just as he felt inclined, and we were shown several rooms with padded couches on which he used to sit. Before the low cushions was always a carved table on which were set ready his jade teacup with its golden lotus-patter stand and cover, his prayer-wheel, and often a bowl of fruit. These rooms were unlike other show places in Tibet, were always scrupulously clean and tidy. it was as if they were all prepared for the imminent return of the next incarnation of Chenrezi. The palaces are storehouses of rich presents that the Dalai Lamas have received in the past from different corners of the Buddhist world. Many were locked away and carefully sealed, but others could be seen in glass cases or were in use as ornaments" [1940, p.184] [MS 19/5/2005]