Interior of the Norbhu Lingka 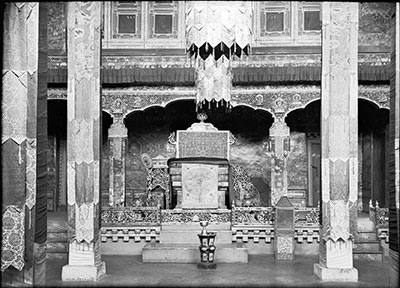 Interior of the 13th Dalai Lama's palace, Chensek Potrang, in the Norbhu Lingka. His throne is covered with an embroidered hanging with Buddhist motifs. Many pillars are covered with silk textiles and silk textile banners hanging from the ceiling

In Negative - The reference 'C-20-9' has been scratched into the bottom right hand corner of the negative. This refers to the numbering system that Chapman adopted for images taken whilst on the British Mission to Lhasa in 1936 [MS 16/5/2005]

Other Information - Description: Chapman wrote "As there was no Dalai Lama during our visit, we were most generously allowed to go there whenever we liked; and when [Sir Basil] Gould was recovering from his illness he was invited to make use of the gardens for convalescence. He took full advantage of this, and, as I usually accompanied him to take photographs, we spent many hours in this delectable place. On such occasions they let us wander where we liked, and it was only when we went into the inner enclosure that a Tibetan came with us" [London: Readers Union, 1940, pp. 182-3]. Chapman also wrote a brief description of this reception room in the book: "The Dalai Lama's reception room is magnificently decorated. The throne, on which he used to sit cross-legged, is about six feet higher than the polished floor. Over the front of it hangs a wonderful piece of embroidery showing the swastika and sacred thunderbolt (dorje) symbols. On each side are pillars swathed in heavy silk hangings. A row of richly coloured thankas framed in brocade hangs along the back wall. The roof beams and the capitals of the pillars are especially beautifully decorated with gold and bright-coloured flower patterns" [ibid., p.184] [MS 20/03/2006]