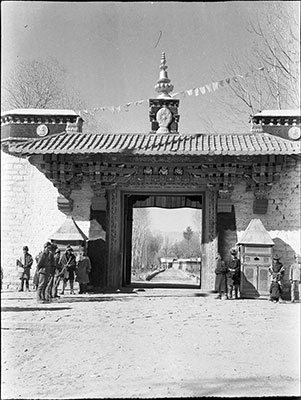 The gateway to the Norbu Lingka with the main building visible through the entrance. Decorated with snow lions and, on the roof, the wheel of law and other gilt ornamentation. Two sentry boxes. Tibetan soldiers standing with rifles by the entrance

Other Information - Photographer: It seems that this image may not have been taken by F. Spencer Chapman. It was made using a quarter plate sized negative, but of a slightly different size to that which Chapman used in his Zeiss Super Ikonta camera. Furthermore, this image does not relate to any negatives numbered '9' in Chapman's handlist of images made whilst he was in Lhasa [MS 20/03/2006]

Other Information - Dates: A possible date of December 1936 has been given for this image because of internal evidence from the photograph [defoliation of the trees] [MS 20/03/2006]

Other Information - Setting: The entrance gateway to the Norbu Lingka (“The Jewel Park”), the Dalai Lama’s summer palace in Lhasa. The Norbhu Lingka was built at the close of the nineteenth century and consists of a large walled enclosure containing a number of buildings. Chapman described the entrance in some detail: “The main gate is most impressive, with a roof of highly glazed tiles and the usual golden medallions on a background of dark red. On each side and above the gate is a system of branching woodwork painted red and picked out with flower-designs in bright colours. A row of grinning white demons look down from beneath the roof. The heavy wooden doors, with metal knockers formed by a ring held in the jaws of a lion, open into a portico, the ceiling of which is richly painted. It is a pity that the square pillars here are of granite which has been treated in the same way as wood, for the stone looks out of place and its surface is little suited to paintwork”. ( Lhasa the Holy City , London: Readers Union, 1940, p.183)

Other Information - Setting: The Dalai Lama's bodyguard were housed in barracks adjacent to the Norbhu Lingka. Chapman described them in his book Lhasa the Holy City: "The nominal strength of this bodyguard is 500, but many of the soldiers were on leave. The barracks face the river and are separated from it by a stony parade-ground where the troops play football. ... There was always a guard in the sentry-box beside the gate. When we gave notice of our intention to visit the palace, there would be a section ready in charge of an N.C.O. They were usually youths, not so tall as the fixed bayonets they carried - it was necessary to have their bayonets fixed as they carried no ammunition" [ Lhasa the Holy City , London: Readers Union, 1940, p.189] [MS 20/03/2006]