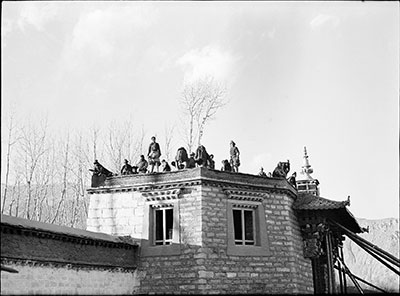 Repairing the Norbu Lingka gateway. Wooden poles propped against the roof joists on the right hand side and people standing on the roof

Other Information - Historical Background: In 1904 the British had not been allowed to visit the Norbhu Lingka, however the Gould Mission was invited. [Marina de Alarcón ZF 1995.1]

Other Information - Description: Chapman wrote a fairly full description of the stonework wall surrounding the Norbhu Lingka, the Dalai Lama's summer residence. In Lhasa the Holy City [London: Chatto & Windus, 1938; reprint London: Readers Union, 1940] Chapman wrote: "The Norbhu Lingka consists of a walled enclosure nearly half a mile each way and more or less square in shape. The Tibetans are skilled wallers, and this is as good an example as any. More than ten feet high, it is built of huge blocks of granite laid in lines and separated by smaller fragments of stone set horizontally. The lower part is whitewashed and is separated from the reddened upper part by a string course. Along the ground at the foot of the wall lie huge coping-stones of granite; these were brought with much labour, often as a punishment for some minor crime, from the mountains on the other side of the Sera plain; but as the strength of the wall was found insufficient to bear so great a weight their use has been abandoned and many of them have lately been broken up for other purposes. ... The main gate is most impressive, with a roof of highly glazed tiles and the usual golden medallions on a background of dark red. On each side and above the gate is a system of branching woodwork painted red and picked out with flower designs in bright colours" [1940, p.183] [MS 28/4/2005]