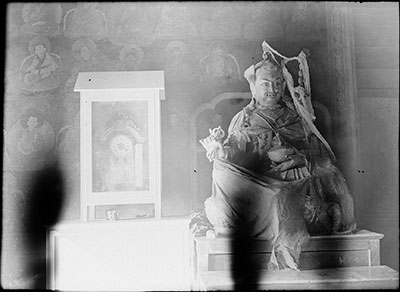 Inside the Potala Palace. A clock on the left, an image of Padmasambhava, probably made of gilt bronze, on the right, with a mural of Buddhist deities behind

In Negative - The number '6' has been scratched into the negative in the bottom right hand corner. This relates to the group of images referred to by Chapman as 'C.14' in his handlist of images taken whilst on the Mission to Lhasa in 1936-7. This small group of negatives (15 in all) were all used to take photographs of the interior of the Potala Palace [MS 11/4/2005]

Manual Catalogues - Caption in Chapman's hand-written list of negatives made whilst on the Mission to Lhasa, 1936-7 [See PRM Manuscripts Collection]: 'Potala clock and a god (rather spoilt)' [MS 18/03/2006]

Other Information - Historical Background: Padmasambhava (also known as Guru Rinpoche) is believed to have come from Swat. Was invited to Tibet during the reign of Srong-tsen Gampo (8th c.) to diffuse the friction between the earlier Bon religion and Buddhism. Founded the first Tibetan Monastery at Samye. [Marina de Alarcón ZF 1995.1]