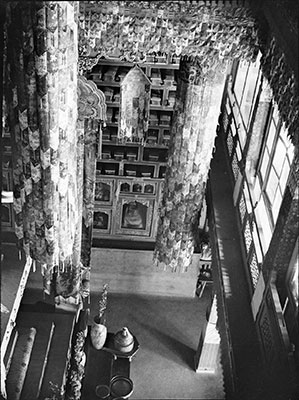 Looking down on part of the 13th Dalai Lama's tomb in the Potala Palace from an upper gallery. Very good view of appliqué victory banners made of brocade

Manual Catalogues - Caption in Chapman's hand-written list of negatives made whilst on the Mission to Lhasa, 1936-7 [See PRM Manuscripts Collection]: 'Looking down onto D.L’s shrine [tomb] - shows more foreground' [MS 18/03/2006]

Other Information - Description: Hugh Richardson wrote a brief description of this tomb in the official Mission Diary for September 6th 1936: "Finally we saw the last Dalai Lama's (the 13th incarnation) recently completed tomband shrine. This is the most striking thing in the Potala. In many previous shrines we had seen masses of heavy gold butter lamps and jewel encrusted images, but this place must contain a fortune in solid gold and fabulous sums in jewels. For the shrine consists of a "Chorten" 30 or 40 feet high, the whole of it covered not merely with gold leaf but with solid sheets of gold, in which are embedded all manner of precious stones, turquoise predominating. In front there were rows of gold lamps, cloisonnee and China vases, and one vessel entirely covered with pearls. Hung all round are rich silk brocades and other subsidiary jewelled images. // Unfortunately this lofty chamber in which this "chorten" is housed is too confined to enable one to get a comprehensive view". [MS 11/4/2005]

Other Information - Description: Chapman described in his book Lhasa the Holy City [London: Chatto & Windus 1938; reprinted London: Readers Union Ltd., 1940, p.180] how, when the Mission members (excluding Sir Basil Gould, who was ill) visited the Potala on September 6th 136, they saw many Tibetan painters working from the upp balcony surrounding the top of the 13th Dalai Lama's tomb: "On the upper story of the tomb, which surrounds the chorten like a balcony, some fifteen of the best Tibetan artists were at work on a series of thankas illustrating the life-story of the Dalai Lama. It was interesting to see them at work. They were obviously men of some standing, as each wore the long turquoise and gold ear-ring. They wore white shirts, indigo or purplish broadcloth robes, and black top-boots. They worked on fine canvas, which had been prepared and stiffened with white paint; this was stretched over a wooden frame about four feet high and two and a half feet wide, which they rested on their knees, as they sat cross-legged on the floor. The paints, made of stones and earths (many of them imported from India) ground up with oil, were in separate porcelain saucers. The brushes, of which each painter used several, appeared to be of hog's bristle. The work was extremely fine and they showed great accuracy and skill, though they all painted in the conventional manner so that it would have been difficult to pick out the work of individual artists. The Potala, considerably conventionalized, appeared in many of the paintings, also procession of monks, street scenes, and landscapes, as well as the usual Buddhas, curly clouds, and stiff formal flowers. As is usual with Tibetan pictures, every corner of the canvas was filled up. Each artist had his wooden teacup and tsamba bag beside him, and seemed to drink every few minutes". [MS 11/4/2005]