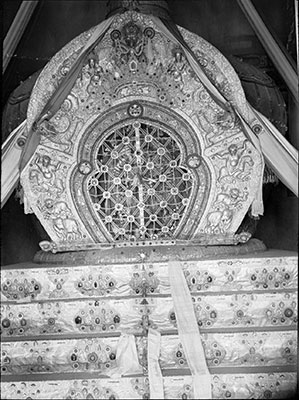 Manual Catalogues - Caption in Chapman's hand-written list of negatives made whilst on the Mission to Lhasa, 1936-7 [See PRM Manuscripts Collection]: 'Details of top of D.L’s shrine' [MS 18/03/2006]

Other Information - Description: Hugh Richardson wrote a brief description of this tomb in the official Mission Diary for September 6th 1936: "Finally we saw the last Dalai Lama's (the 13th incarnation) recently completed tomb and shrine. This is the most striking thing in the Potala. In many previous shrines we had seen masses of heavy gold butter lamps and jewel encrusted images, but this place must contain a fortune in solid gold and fabulous sums in jewels. For the shrine consists of a "Chorten" 30 or 40 feet high, the whole of it covered not merely with gold leaf but with solid sheets of gold, in which are embedded all manner of precious stones, turquoise predominating. In front there were rows of gold lamps, cloisonnee and China vases, and one vessel entirely covered with pearls. Hung all round are rich silk brocades and other subsidiary jewelled images. // Unfortunately this lofty chamber in which this "chorten" is housed is too confined to enable one to get a comprehensive view". [MS 11/4/2005]