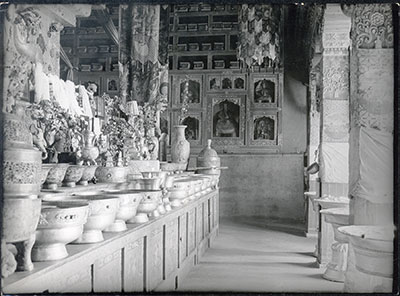 Part of the Potala showing the lower part of the 13th Dalai Lama's tomb known as Serdhung Gelek Dhojo, which was built in 1934-36

Notes on print/mount - The back of the print is covered in crop and reproduction markings. These incluse the instruction 'Cut as shown and reduce to 5 5/8" across', a size that seems to have been employed for images used in the official photograph album of the British Mission to Lhasa in 1936-7. Significant reference numbers include 'C/14/3', which relates to the numbering system that Chapman adopted for images taken whilst on the mission, and the Chatto & Windus publisher reference '41298/15'. The number '43a' has been written in pencil in the top left hand corner. [MS 8/4/2005]

Contemporary Publication - This image was used to illustrate the Mission Diary of the British Mission to Lhasa in 1936-7 for the day of November 22nd 1936. On this day, members of the Mission made a return visit to the Potala Palace: "As Gould was ill, and Nepean and Dagg had not yet reached Lhasa, when we first visited the Potala [on September 6th 1936], we arranged another visit for today. // The Potala defies description. ... whether you climb one of its many flights of stone steps, and thread you [sic] way up dark, slippery staircases eventually to reach the lavishly bejewelled shrine of the last and greatest Dalai Lama, you cannot fail to be impressed, not only by its unique character, but by its sheer immensity" [MS 8/4/2005]