Lhasa and Sho from Potala Palace 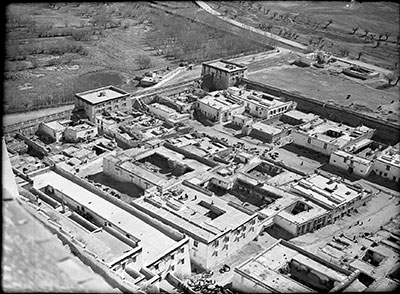 Lhasa and Sho village taken from the Potala. A group of horses and grooms can be seen in the bottom of the image, possibly those of the mission. Image taken looking directly down into the settlement below the Potala, showing the rooftops and courtyards of the buildings

Manual Catalogues - Caption in Chapman's hand-written list of negatives made whilst on the Mission to Lhasa, 1936-7 [See PRM Manuscripts Collection]: 'View down onto courtyard etc. of Potala' [MS 18/03/2006]

Other Information - Description: This photograph was taken on September 6th 1936,when the Mission party spent two hours looking over the Potala. Chapman describes this part of the building in his publication Lhasa the Holy City [London: Chatto & Windus, 1938; reprint, London: Readers Union Ltd., 1940, p.181]: "Immediately below lies the great square courtyard of the southern entrance with its battlemented walls and massive gate-towers" [MS 7/4/2005]