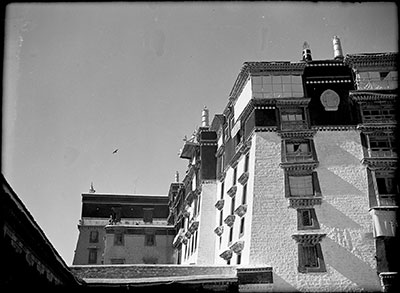 Part of the Potala Palace showing the corner of the Dalai Lama's quarters seen from the Eastern Courtyard or Deyang Shar. There is a mantra on the red painted wall, facing. The building is framed in the right diagonal of the image, with sky filling the rest of the frame, a solitary bird flying above

Other Information - Setting: This photograph was taken on September 6th 1936, when the mission party spent two hours looking around the Potala. Chapman describes this part of the building in his publication Lhasa the Holy City [London: Chatto & Windus, 1938; reprint, London: Readers Union Ltd., 1940, p.174]: "Over the central line of windows of each block are draped brown yak-hair curtains striped horizontally with white. The roofs of the terra-cotta central portion and of the wing to the east of it, which contains the Dalai Lama's private suite of rooms, are especially beautiful. Here there is a wide strip of dull maroon bordered above and below with white. In the centre of this rich matt surface, which forms an ideal background for them, are four very large embossed monograms of gold, with several smaller ones on either side. These ornaments prepare one for the larger mass of gold on the roof-pavilions. Spaced along the edge of the parapet and at the corners are golden turrets and cylindrical banners of black yak-hair crossed with white. These serve - as well as keeping off devils - to break the severity of the sky-line, which is further relieved by the roof pagodas". [MS 7/4/2005]