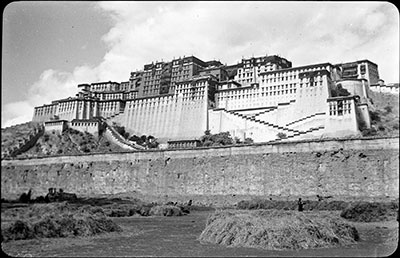 The south face of the Potala Palace. Stonework walls and cropped vegetation are visible.

Other Information - Photographer: 'YN' scratched into the negative indicates that this image was taken by Evan Yorke Nepean, the wireless operator who was in Lhasa with the Mission during the period 6th September to 14th December 1936. [MS 4/4/2005]

Other Information - Setting: Chapman describes the best vantage point for viewing the Potala in his book Lhasa the Holy City [London: Chatto & Windus, 1938; reprint, London: Readers Union Ltd., 1940] as being from the government part or lingka: "Not only does its beauty of form and colour take one's breath away, but it is of such colossal size. This is best appreciated from the Government lingka below the southern face. In front of one is the level turf where a few yaks are grazing. Beyond this is a line of misty green pollard willows through which appear the flat roofs of Sho, the hamlet that nestles at the foot of the Potala. Behind this starts the great rock, strewn with small willows, on which the palace is built. It is difficult to tell where the actual building starts, as the foundation seems to grow out of the rock, and the whitewash on the walls has run down over the lower buttresses. Huge staircases, protected by walls which are themselves cut into enormous steps, zigzag up to the doorways which, as none of them face south, are not visible from here. As the whole building leans back, and as each 'vertical' wall leans inwards, the impression of height is still further enhanced. It is actually 440 feet high and 900 feet in length. Except for the central part, which is of a rich maroon colour, and a small block which is ochreous, the walls are whitewashed, and each block of masonry is picked out with a border of deep red along the summit, surmounted in its turn by a narrow white parapet. the form of the whole is reflected in each window, which broader at the bottom than at the top and is shaded by a wide lintel. // The Potala gives the impression not of having been built by man but of having grown there, so perfectly does it fit in with its surroundings" [1940, p.173] [MS 4/4/2005]