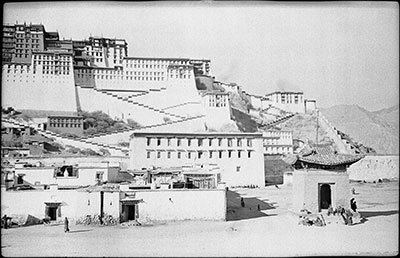 The south face of the Potala Palace with the village of Sho in the foreground beneath it.Also in foreground to the left of image is a pagoda sheltering an inscribed stone recording Chinese victory.

Manual Catalogues - Caption in Chapman's hand-written list of negatives made whilst on the Mission to Lhasa, 1936-7 [See PRM Manuscripts Collection]: 'Donkeys with loads of sticks'. Note: although this image has been attributed with the caption cited, it seems that it is probably the other half of the front view of the Potala referenced in '7.5' [1998.131.300]: 'Pair of front of Potala L.' [MS 18/03/2006]

Other Information - Chapman devoted a chapter in his book Lhasa the Holy City [London: Chatto & Windus; reprint, London: Readers Union Ltd., 1940] to the description of the Potala Palace. The following gives a sense of his attitudes towards this place following his six months in Lhasa: "Certainly the Potala is one of the most astonishing buildings in the world, whether it is seen from afar perched on the summit of the eminence which rises from the level plain of Lhasa, with the sun striking flame from the golden pavilions of its roof, or whether, riding out before dawn, you see the moonlight thrown back with unearthly brilliance from the whitewashed wall of the immense southern face. All the supremely great works of art, in literature, painting, or architecture, have an undefinable quality of magic which is born from circumstances usually beyond the artist's control; so, in common with the few unquestionably perfect buildings of the world, the Potala has some transcendent quality derived neither from the inspired skill of some master builder or craftsmen, not from its historical association, nor from the fact that it is the cynosure of innumerable religious devotees. That it does possess this divine excellence cannot be doubted" [1940, pp.171-2] [MS 4/4/2005]