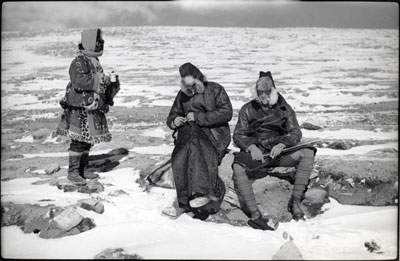 Sir Basil Gould, Captain W.S. Morgan of the Indian Medical Service and syce in February - March 1937 following the departure of the Mission party from Lhasa. All in winter dress. Smoking.

Other Information - Related Images: Images prefixed with 'G' comprise a group of negatives containing images of the route from Lhasa including Yatung, Gyantse, Kala and Red Idol Gorge. The Mission left Lhasa on February 7th 1937 and so this photograph was taken some days after this date [MS 18/03/2006]

Biographical Information - Sir Basil J. Gould was Political Officer for Sikkim, Bhutan and Tibet and leader of the 1936 British Mission to Lhasa. He was invited to attend the installation of the 14th Dalai Lama in 1940 and made a final visit to Tibet in 1944. Heavily influenced by Sir Charles Bell (his predecessor as Political Officer) Gould was determined to establish a firm foothold for the British government in Tibet. He also took great pains to record and translate the Tibetan language and is said to have memorised a set of stock honorific phrases to assist in his diplomatic endeavours. Gould was renowned for his capacity for hard work and his colleagues found him “a lot to live up to”. As a career diplomat he was highly conscious of status, within both the British and Tibetan systems. He was pleased to be referred to as Lönchen – equating his rank with that of a Tibetan prime minister and is reputed to have worn evening dress for dinner even when in camp. [CH 2003]