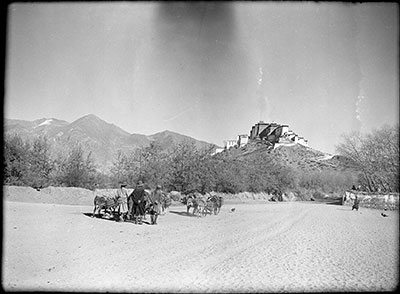 Muleteers with pack animals approaching the Potala from the west, walking along a sandy track, with sand banks on the left and the wall of a garden or park on the right

Manual Catalogues - Caption in Chapman's hand-written list of negatives made whilst on the Mission to Lhasa, 1936-7 [See PRM Manuscripts Collection]: 'Potala from W. donkeys walking away' [MS 18/03/2006]