Potala from south west with procession 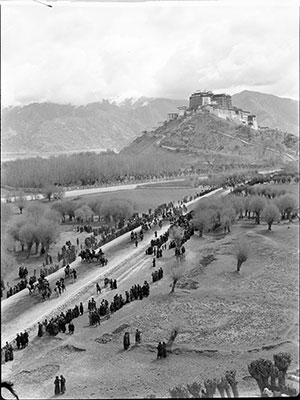 The Potala Palace from the south west. Spectators line the route

In Negative - The film has a number '7' printed on the bottom right hand corner and there are two areas of damage along the bottom edge, although these do not interfere with the image [MS 4/4/2005]

Other Information - Setting: This image could have been taken at any one of a number of processions witnessed by the British Mission to Lhasa in 1936-7 during their stay. Most likely it is the procession of the Regent going to Samye, which took place on October 6th 1936, although this requires further investigation. However, internal evidence in the photograph, particularly the dense rain clouds, suggests that this image was taken at around this time of year [MS 18/03/2006]

Other Information - Cultural Background: Chapman wrote in his publication Lhasa the Holy City [London: Chatto & Windus, 1938; reprint, London: Readers Union Ltd., 1940]: "The Tibetans, in common with most Orientals, are very fond of ceremonial processions and the observation of festivals and saints' days; and during our six months at Lhasa we were the fortunate spectators of several such celebrations, for the Tibetan officials and people, in spite of their general policy of seclusion, were anxious that we, as their guests, should be given full opportunity to witness these scenes of gorgeous pageantry and ceremonial. If we were not formally invited by the Government we would usually receive a special message from Tsarong or from some other official telling us what was toward and where we should with most advantage station ourselves. Apart from the New Year Festivities, ... the most spectacular procession was on the occasion of the Regent going on tour" [1940, p.216] [MS 4/4/2005]