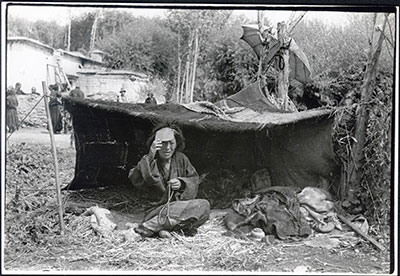 A Tibetan patient in front of yak hair tent after cataract operation performed by Dr Morgan, the Medical Officer on the British Mission to Lhasa 1936-37. Buildings in the Dekyi Lingka, where the mission stayed in Lhasa, can be seen in the backgroung with groups of people in front of it. An umbrella has been attached to the blanket poles

Notes on print/mount - The reference number 'C-V-17' has been written on the back of the print in pencil. This relates to the numbering system that Chapman adopted for the images taken during the British Mission to Lhasa in 1936-37. The number '7' enclosed in a circle has also been written in pencil in the bottom left hand corner [MS 2/4/2005]

Contemporary Publication - This image was used to illustrate the Mission Diary for October 7th 1936 in a section relating to the medical activities of the Medical Officer Dr Morgan during the Mission.

Other Information - Setting: In his book Lhasa the Holy City [London: Chatto & Windus 1938; reprint, London: Readers Union Ltd., 1940] Chapman provides a description that seems to fit this scene: "There was little accommodation at the hospital, and patients who needed continuous treatment or who had come from a distance had to bring their own tents; it was no uncommon sight to see a dozen cloth or yak hair tents pitched beneath the trees around the hospital. ... Most amusing was what we called "the opthalmic ward", which consisted of a single piece of yak-hair sacking stretched between two trees, and affording shelter for a grimy old beggar woman who was being prepared for a cataract operation. This complaint is very prevalent in Tibet, and Morgan must have operated successfully on at least thirty patients whose sight had practically gone. Monks and nuns were conspicuous amongst these cataract cases and would see these aged people, supported on the arm of a friend, hobbling around with their eyes swathed in bandages - for the eyes must not be used after the operation until the skin of the iris is healed" [1940, p.242] [MS 2/4/2005]