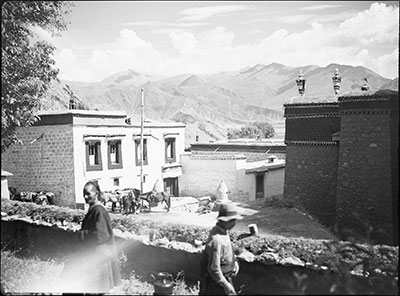 View of Nechung Monastery in Lhasa. Two Tibetan men can be seen standing near to the wall in the foreground of the picture and there is a metal vessel in the centre bottom of the frame. Horses with European-style saddles can be seen tethered outside the house, possibly belonging to the British Mission. Victory banners can be seen on the roofs of the houses. A cone-shaped Sang bum for burning dried juniper can be seen in the centre of the image. These are frequently to be found outside houses and along roadsides. The mission visited Nechung on this day after first visiting Drepung Monastery

In Negative - There are many small abrasions in the top right hand corner of the negative. This is common in many of the negatives in Chapman's collection of this size and make. The number '8' has been printed on the negative on the left hand side. This has enabled the identification of the images as C.2.8 in Chapman's handlist of images taken in Lhasa, and thus the date and place [See PRM Manuscript Collections and Related Documents Files for F. Spencer Chapman] [MS 21/2/2005]

Manual Catalogues - Caption in Chapman's hand-written list of negatives made whilst on the Mission to Lhasa, 1936-7 [See PRM Manuscripts Collection]: 'Part of [Nechung] oracle’s monastery' [MS 17/03/2006]

Other Information - Related Images: Images prefixed with 'C.2' comprise a group of negatives containing images of the treasurer, panorama from Drepung, and Nechung monastery, all of which seem to have been taken on August 30th 1936 [MS 17/03/2006]

Other Information - Date: This image has been identified by Chapman as "Part of [Nechung] oracle's monastery" in his handlist of images taken from Lhasa. This is one of a small number of quarter plate images that were taken on 30th August 1936, on which day Sir Basil Gould had arranged for members of the Mission party, as part of their regular Sunday 'day off' activities, to visit both Drepung Monastery and Nechung [MS 17/11/2005]

Other Information - Description: The visit to Nechung on this day is described in the official diary of the Mission. At this time, the diary was being written by Brigadier Philip Neame and he wrote: "[After Drepung] We then proceeded to the 'Nachung' or temple of the Great Oracle of Tibet, a mile from Drepung gompa, where we had a pic-nic lunch under a grove of trees at which we entertained our Tibetan guides and our own clerks, who had accompanied us to Drepung, much to their delight. // After lunch we went all round the oracle's temple guided by a very intelligent Urdu speaking lama. // Gould is having attention paid to him by the Oracle, who is coming to pay an official call tomorrow, a thing the Oracle has never done to any other Political Officer before". It became typical during the course of the mission that Chapman would take photographs in which a future guest would be interested in just prior to their visit to the Mission quarters at Dekyi Lingka. This would enable Chapman to develop the images before they arrived and for them to be shown as part of the entertainment. The Nechung Oracle seems to have demonstrated a very keen interest in photography, after the departure of the main mission party in 1937 inviting Hugh Richardson to come back to the monastery and put on a cine display for the monks as well as to take images of the oracle himself [see Hugh Richardson Archive in Oriental Library, Bodleian Library, Oxford University, MS Or Richardson 3 folio 127] [MS 17/11/2005]