Lake near the Serpant Temple, or Lukhang , Lhasa 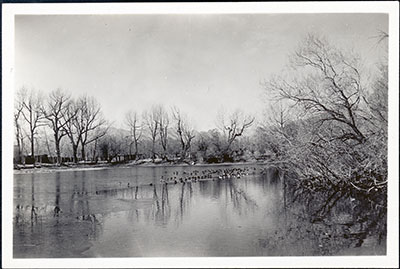 Brahminy duck on the lake behind the Potala in which the Serpent Temple or Lukhang is situated. Bare trees surround the lake and the ducks can be seen gathered together in the centre

Other Information - Description: Chapman describes visiting the 'Snake Temple' on September 10th 1936 in the official Mission Diary. He further described the lake in his publication Lhasa the Holy City [London: Chatto & Windus, 1938; reprint, London: Readers Union Ltd., 1940]: "The Ling-kor follows the wall of the Snake Temple and of the flooded reed-covered enclosure alongside. On the left are marshes where grow some of the typical Lhasa willows with gnarled spiral-twisted trunks. This is a favourite haunt for birds; in September we would see flocks of literally hundreds of pintail, shoveller, mallard, pochard, and teal, together with the ubiquitous bar-heads and Brahminy ducks" [1940, p.165] [MS 1/4/2005]