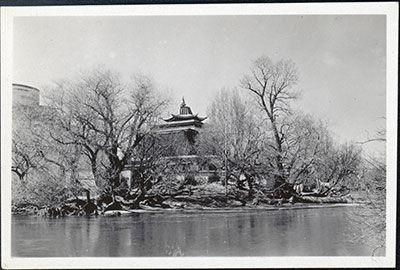 Other Information - Description: Chapman describes visiting the 'Snake Temple' on September 10th 1936 in the official Mission Diary. His description of the place was brief and unsympathetic: "We went this morning to inspect the very ancient and highly revered "Snake Temple" on an island in a small lake below the Potala. It is dark, poky [ sic ] and smelly, but had many curious idols, with a halo of snakes round the idol's head. It is supposed to be a water deity. The journey across the little lake takes place in a very ricketty flat bottomed wooden punt. // The Dalai Lama used sometimes to go there for a few hours to meditate; we saw his room and divan". He wrote a fuller description of the temple in his book Lhasa the Holy City [London: Chatto & Windus, 1938; reprint, London: Readers Union Ltd., 1940]. In this description he seems better able to contextualise his impressions in the light of further experience: "The temple was considered by the Chinese to be one of the five beauties of Lhasa. We visited it soon after we arrived. There is a causeway of ancient poplar logs, but in September it was submerged and a ragged boatman was there to ferry us across to some stone steps that come down to the water's edge. ...// In the shade of an enormous poplar is the temple, small and square roofed, with a curious hexagonal tiled dome and a conventional conical ornament on the summit. Hanging from the six corners of the roof are gilt dragons with raised elephantine trunks, from each a golden bell is suspended with a piece of flat metal attached to the clapper so that they tinkle in the wind. behind the temple rises the northern escarpment of the Potala, somewhat foreshortened from here but as impressive as ever. The temple, like so many Tibetan shrines, is disappointing inside, nor are there any snakes - at any rate not live ones, though some of the idols have diadems or necklaces of writhing serpents. There is, however, a small chamber with a divan where the Dalai Lama used to come and meditate for hours together. // This temple is the abode of a most powerful demon who is the spirit of the lake on which the city of Lhasa is built. On a certain day of each year all the officials and people of Lhasa must visit the temple in order to propitiate him. Having walked in procession round the city the Prime Minister and the Shap-pes, dressed in their yellow silk robes, and other officials in all their finery, must present scarves to the water-spirit. Yak-hide coracles are brought in and the officials have to remain for some time afloat. Although we did not see this ceremony, as it takes place in the early summer, we saw a small cinema film that Tsarong made of it, and though the photography was bad - he had waved the camera about like a hose pipe - it was enough to let one realize what a magnificent sight this must be" [1940, pp. 163-5] [MS 1/4/2005]

Other Information - Historical background: The Lukhang is believed to have been built by the Sixth Dalai Lama, who is known to have taken great pleasure in the gardens around the temple when he wanted some respite from the more enclosed and sombre setting of the Potala Palace. However, legend also has it that the building was initiated by the Fifth Dalai Lama. In this legend, when the Potala was being built a pit is believed to have opened up and filled with water because the nature spirits of the place were disturbed. The Dalai Lama then promised to build a temple to placate them. The walls of the Temple were covered with many beautiful murals of great religious and artistic quality [MS 21/2/2005]