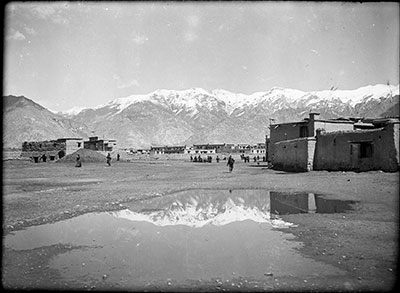 Outskirts of Lhasa. Reflection of hills in water. Groups of people in view including a person on horseback in the distance and a group of people gathered together in the centre

Manual Catalogues - Caption in Chapman's hand-written list of negatives made whilst on the Mission to Lhasa, 1936-7 [See PRM Manuscripts Collection]: 'Far side of city snowy hills and reflections' [MS 17/03/2006]