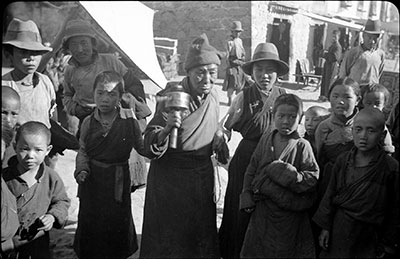 A crowd of children and adults in the Barkhor area of Lhasa gather around the photographer. The central figure is holding a prayer-wheel, which is in motion. Shops with textile awnings can be seen in the background and just behind the group on the left hand side

Other Information - Photographer: The inscription 'YN' in the negative seems to relate to Evan Yorke Nepean, who was part of the Mission to Lhasa in 1936-7 and who took many photographs alongside Chapman. For this reason the image has been reattributed as having been taken by Nepean. Nepean was in Lhasa from September 6th 1936 to December 14th 1936 and, if taken by him, the photograph must have been taken between those dates [MS 18/2/2005]

Other Information - Dates: The date has been suggested by comparing this image with others taken by Chapman, which were clearly taken at the same time, and for which at possible date has been determined [MS 16/03/2006]