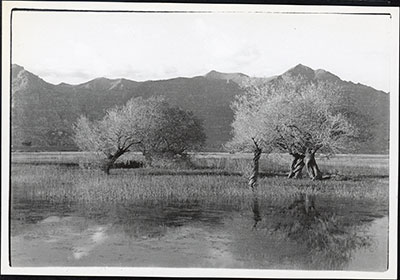 Willow trees in the marsh behind the Potala Palace. Trees are reflected in the water of the flooded marsh. Mountains rising in the distance from the edge of the plain

Manual Catalogues - Caption in Chapman's hand-written list of negatives made whilst on the Mission to Lhasa, 1936-7 [See PRM Manuscripts Collection]: 'Willows in marsh behind Potala'; PRM Manuscripts Collection: ‘List of Tibetan Prints and Negatives’ - Book 1, From Gangtok to the Natu La August 1936: ‘34/1 - Curious twisted willows in Snake Temple grounds [MS 16/03/2006]

Other Information - Related Images: Images prefixed with 'CS.' comprise a group of negatives containing images of patients from Dr Morgan’s hospital, Mir Khan [Mission cook], curio sellers, bookshops, street scenes, Jokhang, willows and Chapman. It seems likely that they were all taken on the same day, September 3rd 1936. On this day the Mission visited the Jokhang temple and it states in the diary that the trip TRIP ENABLed THEM TO SEE THE CITY STREETS. Many of these images were subsequently used to illustrate the Mission Diary in early October when there were few formal activities to keep the Mission members officially preoccupied. Richardson states in the Diary entry for October 7th 1936, which the 'C-S-'prefixed images illustrate, that it was a quiet time in which the Mission members were able to pursue some of their own interests: "No engagements. We seem to have come into quiet times and can each return to his respective occupation. Mr Gould, Norbhu and Richardson to their files, Chapman to sorting cinema films and flowers and to writing up bird notes; Dagg and Nepean to overhauling wireless and electrical equipment; and Morgan to his hospital where in a dingy Tibetan room (rather like a stable) lighted by and open well in the roof, he removes cataracts, amputates fingers, gives injections and performs the many other mysteries of his profession. ... No engagements and nothing to record" [MS 26/3/2005]