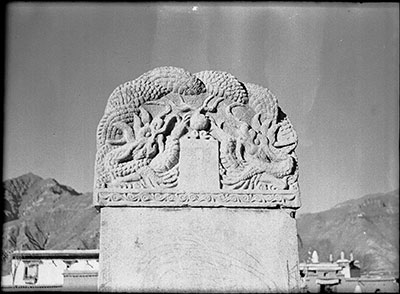 Capitol of a Ching Dynasty inscribed pillar near the Chinese compound in Lhasa. Two dragons. Symbols of Chinese Emperor

Other Information - Related Images: Images prefixed with 'C.16' comprise a group of negatives containing images of the Regent’s boat waiting for his departure, a mission picnic, the Potala, old beggar monk and Chinese lions at Trapje. They all seem to have been taken between October 6th - 17th 1936. [MS 16/03/2006]