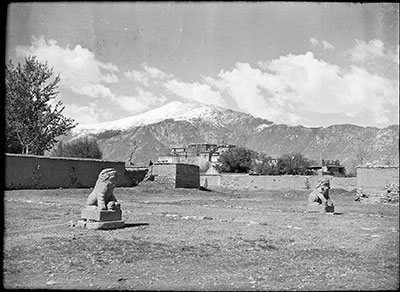 Two stone lions at the entrance to the Chinese special representative or Amban's compound. Good view of stonework walls. Potala in background. Tree on left of image. The wall on the left hand side has been knocked down. Possibly a more elaborate entrance in the centre background. The Chinese Amban resided here until 1912 when he was expelled from Tibet along with the occupying forces in Lhasa

Manual Catalogues - Caption in Chapman's hand-written list of negatives made whilst on the Mission to Lhasa, 1936-7 [See PRM Manuscripts Collection]: 'Chinese place and lions' [MS 16/03/2006]