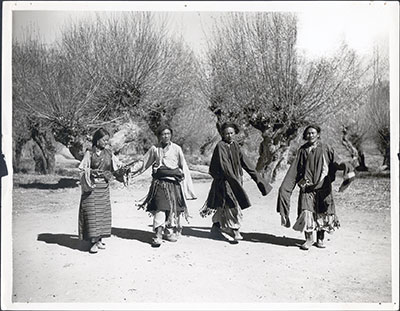 Group of three male dancers and a woman, left, wearing the dress typically seen worn in central Tibet. These dancers are likely to be performing by invitation in the grounds of the British Mission residence in the Dekyi Lingka. The musician and dancers appear to be in a row but are all moving. The men are wearing loose-fitting, long-sleeved jackets and wide, billowing trousers of the kind commonly seen in the eastern part of Kham district called Bathang. The men are all wearing long, fringed belts around their waists, which emphasise movement when dancing

Manual Catalogues - Caption in Chapman's hand-written list of negatives made whilst on the Mission to Lhasa, 1936-7 [See PRM Manuscripts Collection]: 4 in line dancing woman (and fiddle) on right [MS 16/03/2006]

Other Information - Cultural Background: The trouser style is the same as people referred to as Bathang in the south east of Kham region would wear. They would come to Lhasa possibly on pilgrimage and would perform to raise money. The woman is not wearing Khampa or Bathang dress but the ordinary dress of central Tibet. The instrument she is playing is called pi wang. The tassels on the men's dress is used to enhance the dramatic effect of their acrobatic dances; for the same reason the trousers are very baggy to exaggerate the shapes and movement of the dance [TS 31/1/2005]