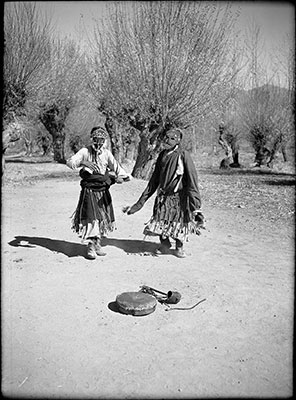 Other Information - Description: These two masked performers seem to be part of the well-known dance troupe the Khampa Dancers, which Chapman describes in his book Lhasas the Holy City [London: Chatto & Windus, 1938; reprint, London: Readers Union Ltd., 1940]. He wrote of them: "Another form of entertainment was provided by troupes of dancers who appeared from time to time at the Dekyi Lingka. One group, known as the Khampa Dancers - since this form of dancing originated in Kham - were skilful acrobats. These were professional players who toured southern Tibet and even went down to Gangtok and Kalimpong. ... // In another dance the men wore flat masks on which the features were indicated with pieces of cloth and cowrie shells. Two dancers would face each other and with hands on hips would ludicrously twitch their heads and shoulders in mock battle. Suddenly they would hurl themselves in a backward somersault, landing on their feet, to resume the contest. Then, grasping each other so that one man's feet then the other's standing on the ground" [ibid., pp. 272-3] [MS 26/3/2005]