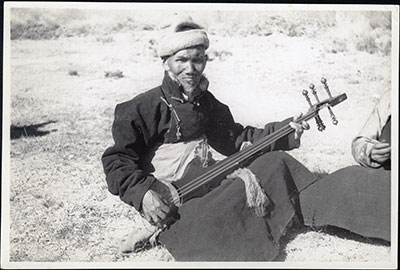 A Ladakhi musician playing and instrument called dramyen, seated cross-legged on the ground. The group of which he was a part were entertaining the British Mission party and Tibetan officials at the Mission residence in the Dekyi Lingka. He appears to have a cloth tied high around his waist. The right hand, arm and knee of a fellow musician can be seen in the far right hand side of the image. A metal key hangs from the button at the top front of his coat or chuba

Notes on print/mount - 'BJ 7' has been written in pencil on the back of the print in the centre. This relates to the numbering system that Chapman adopted for images taken on the British Mission to Lhasa in 1936-37 [MS 14/2/2005]

Other Information - Cultural Background: Most musicians of popular music in Tibet were Ladakhi moslems. [TS 14/2/2005]

Other Information - Location: The statement that this musician is playing in the environs of the Dekyi Lingka is derived from a viewing of the cine film that also constitutes part of the Chapman Collection in the PRM.

Other Information - Dates: Chapman used other images of the band members to illustrate the text of the official Mission Diary for January 1st 1937. On that day the Mission invited some of the leading Tibetan officials to lunch to celebrate the New Year. He wrote: "Out in the garden we had the Lhasa Band and dancers. The former consists of two Chinese fiddlers, one of them blind, a bearded Ladaki, who plays a flute, and a Tibetan with another curious stringed instrument. The blind fiddler, incidentally, enjoys the privilege of being allowed to smoke even in the presence of the Cabinet" [MS 14/2/2005]