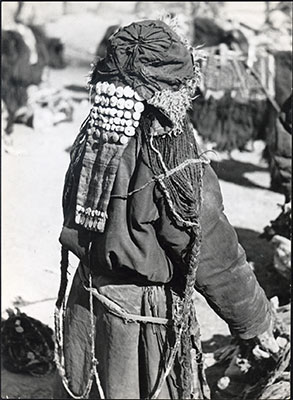 Back view of a Horpa woman from eastern Tibet. The plaits are decorated with a strip of cloth with coins, silver medallions and conch shell buttons sewn on to it. The Plaits Are Attached To The Belt. Yaks with packs are visible, but out of focus, in the background. The hat has a sheepskin inner and a brocade outer and the back is open slightly to reveal the textile extension that have been attached to her plaited hair

Notes on print/mount - '9-15' has been written on the back of the print in pencil. This relates to the numbering system that Chapman adopted for the images that he took whilst on the British Mission to Lhasa in 1936-37 [MS 11/2/2005]

Manual Catalogues - Caption in Chapman's hand-written list of negatives made whilst on the Mission to Lhasa, 1936-7 [See PRM Manuscripts Collection]: 'Ditto [Close up of Kamba woman] standing facing away v.g. but muddy behind' [MS 16/03/2006]

Other Information - Description: Although Chapman did not use this image to illustrate the official Mission Diary of 1936-37, he included a description of the head dress worn by this woman in introduction to Part XIII of the Diary (January 15th - 31st 1937). He wrote: "Most of the travellers are nomads from the Chang Thang or the Hor or Kham provinces. ... One woman - who had come eight days' journey from the North of Lhasa with yaks loads of Juniper wood - had her hair divided in the middle, and each half plaited into innumerable minute tresses and then looped up to her belt by a long string of turquoise and coral beads. On the back of the head, between the two lots of plaits, was a bit of cloth about a foot in length and half that width, arranged with lines of white shells, bone buttons and, more extraordinarily still, a row of regimental brass buttons including one of a British soldier. In addition to all this she wore, over here forehead, a rosette as big as a sorcer of different coloured beads." He wrote a shorter description of this woman's head dress in his publication Lhasa the Holy City [London: Chatto & Windus, 1938; reprint, London: Readers Union Ltd., 1940]. He wrote: "The most remarkable thing about these nomad women is their head-dresses which exhibit untold variety. One woman (I think from Nagchuka) had her hair tied into innumerable minute plaits, each no thicker than blindcord. These were divided into two bundles and looped up to her belt. Over the nape of her neck and hanging from her hair was a square foot of cloth ornamented with cowrie shells and, apparently, white bone trouser buttons. Over her forehead was a rosette the size of a saucer, of small blue, white, and red beads" [ibid., p.159] [MS 26/3/2005]

Other Information - Cultural Background: Wealth Is Carried On The Back And Money Is Generally Not Carried . Chapman Says This Nomad Comes Possibly From Nagchuka (north west of Lhasa). Nomads Travelled From Chang Tang In North To Kham in east. [Marina de Alarcón ZF 1995.1]