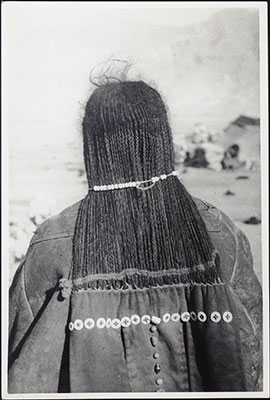 Back view of a nomad woman showing long strip of cloth attached to several thin plaits of hair. The hair appears to be twisted at the top before being plaited further down its length. Buttons, coins, medallions and stones sewn on to this cloth. The beaded plait tied around the hair and the buttons and beads sewn on the textile are clearly visible in this image. The textile extension is fringed at the bottom. In background, a person sewing bags of salt next to a yak wool tent. The figure in the background is packing salt crystal into bags to trade

Notes on print/mount - 'BJ 34' has been written across the back of the print in pencil. This relates to the numbering system that Chapman adopted for the images that he took whilst on the British Mission to Lhasa in 1936-37 [MS 10/2/2005]

Manual Catalogues - Caption in Chapman's hand-written list of negatives made whilst on the Mission to Lhasa, 1936-7 [See PRM Manuscripts Collection]: 'Close up of Ditto [back of Kamba woman]' [MS 16/03/2006]

Other Information - Description: Although this image was not used to illustrate the Mission to Lhasa Diary entry for January 7th 1937, it seems to have been part of a set of images that were taken on that date, when Chapman rose early to travel to the outskirts of Lhasa to photograph some of the nomad groups that had come to the city to pay taxes and participate in the New Year festivities shortly to take place. The main text in the Diary that this image relates to is as follows: "The women, who are remarkably handsome, wear their hair in innumerable minute plaits which are attached at shoulder level to a multi-coloured piece of canvas which hangs down almost to the ground. This cloth is ornamented with silver buttons, Chinese dollars and other trinkets. Although we visited their tents at dawn many of the men had already set off with yak-loads of salt and yak-dung - representing their taxes - to be delivered at the Potala".

Other Information - Description: Chapman wrote a further, fuller description of the dress and hair style of this particular woman in his publication Lhasa the Holy City [London: Chatto & Windus 1938; reprint, London: Readers Union Ltd., 1940]. He wrote: "Another head-dress [for prior reference see 1998.131.248 & 1998.131.249] was even more remarkable: the woman's hair was again tied into tiny plaits and these were sewn on to a long strip of cloth woven in green and scarlet squares that reaches almost to the ground. These squares were ornamented with Chinese dollars, Indian rupees, pieces of coral and turquoise, rows of cowrie shells and carved ivory; and in the centre was a beautifully embossed disc of silver. I wondered how often she washed her hair! Some women wear two lumps of amber as big as plums on top of their heads, and usually a few turquoises or corals between. Sometimes strips pf black, green, or scarlet cloth are sewn on to the border and sleeves of the sheep-skin garment. This is very effective" [1940, p.159]. [MS 26/3/2005]