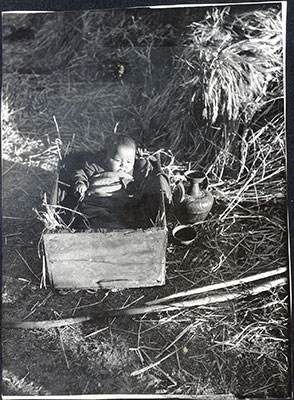 A Tibetan baby lying in a box upon a pile of hay, with a teapot and teacup on the right hand side of the box. Two wooden poles can be seen lying in front of the box and stacks of hay are visible piled up in the background. Some pieces of hay have been placed in the box for the baby to play with. The baby has been placed in the box to keep him/her safe while the family harvests the crop of hay

Manual Catalogues - Caption in Chapman's hand-written list of negatives made whilst on the Mission to Lhasa, 1936-7 [See PRM Manuscripts Collection]: 'Child asleep in box - and teapot'; PRM Manuscripts Collection: ‘List of Tibetan Prints and Negatives’ - Book 4: ‘9/2 - A Tibetan child (possibly the next Dalai Lama?) parked beside teapot while his mother works in the fields’ [MS 16/03/2006]

Other Information - Related Images: This image is part of a pair of images of this baby [1998.131.238 and 1998.131.239]. It is this image that appears to have been preferred as it is covered in reproduction instructions. There has been some movement of the domestic vessels in the two images to create the best effect. Also, one has been taken in portrait format, the other in landscape format [MS 4/2/2005]

Other Information - Related Images: Images prefixed with 'C.7.' comprise a group of negatives containing images of the Turquoise Bridge, winnowing grain, willows behind the Potala, child asleep in box with teapot, views of Potala and Kundeling. They all seem to have been taken between November 13th - 15th 1936, when harvesting was taking place around Lhasa [MS 16/03/2006]