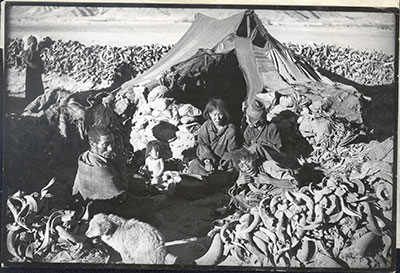 A disposer of the dead or Ragyapa family by their shelter with a yak wool tent roof and surrounded by horns from animals that they have slaughtered as part of their duties. Ragyapa must dispose of any animal carcasses as well as dead people. Dog in foreground

Notes on print/mount - The caption 'Outcasts tent surrounded by horns from animals slaughtered' has been written across the back of the print in pencil. The caption 'An outcast's tent surrounded by a wall of bones from animals he has slaughtered' has been written on the tracing paper that has been attached to the back and folded over the front. There are also cropping instructions, which would result in the figure in the background being cropped from the scene. '8-7' has been written on the back in red crayon. Further reference numbers include '8-13' written on the middle of the back of the print in pencil and the Chatto & Windus publisher reference C&W41074/18. Chatto & Windus published Chapman's book of the Mission to Lhasa, Lhasa the Holy City in 1938. 25b has been written in the top left corner [MS 4/2/2005]

Manual Catalogues - Caption in Chapman's hand-written list of negatives made whilst on the Mission to Lhasa, 1936-7 [See PRM Manuscripts Collection]: 'Ragyapas - close ditto [general view tent and horn walls] dog in foreground'; PRM Manuscripts Collection: ‘List of Tibetan Prints and Negatives’ - Book 4: ‘16/2 - The Ragyapas or disposers of the dead and butchers with walls made of horns of slaughtered animals’ [MS 16/03/2006]