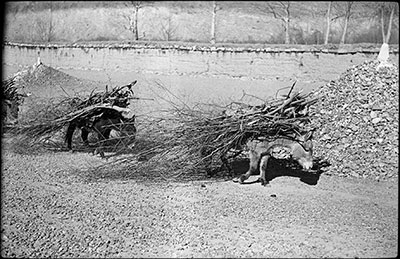 Mules carrying loads of brushwood. Three mules can be seen loaded down with branches, walking along a road

Manual Catalogues - Caption in Chapman's hand-written list of negatives made whilst on the Mission to Lhasa, 1936-7 [See PRM Manuscripts Collection]: 'Donkeys with loads of sticks' [MS 16/03/2006]

Other Information - Related Images: Most of the images referenced by two numbers [e.g.: 7.6] rather than an alpha numeric sequence are used to illustrate sections in the official Mission Diary for the month of January in 1937. Those prefixed with '7.' comprise a group of negatives containing images of the Potala, yaks and donkeys [MS 18/3/2005]